Due to the Corona virus, the music rooms will be closed until further notice.
You can find the latest information about the virus here:

As long as the rooms are closed, no further keys will be issued. Accordingly, new rental requests cannot be answered positively.
As soon as the music rooms are allowed to open again, this message will be removed.

The Music Rooms Working Group takes care of the maintenance of the four music rooms on the Vaihingen campus and organises the rehearsal schedules.

Every enrolled student has the possibility to rent one of the rooms. As capacities are unfortunately very limited, rehearsal times are allocated in consultation with the tutorial.

You can find the booking plan here. 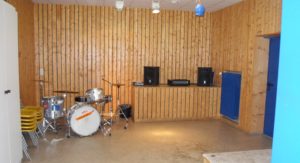 Both rehearsal rooms are equipped with a drum kit and a small system consisting of a power mixer and two speakers.

Other equipment such as cables, microphones and amplifiers are not part of the inventory. 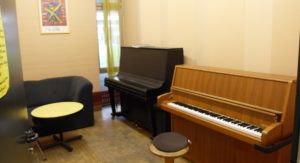 If you have any questions about the rehearsal rooms or about renting them, please write an email to musikraumtutor@stuvus.uni-stuttgart.de.